Introduction: The pistachio genus (Pistacia) belongs to Anacardiaceae family. Three species of common pistachio (P. vera, P. khinjuk and P. atlantica) was found in Iran. Bene )P. atlantica (is a dicotyledonous tree with a height of more than 17 meters, is the most important species of Zagros region with valuable main and secondary products. This tree was also used as a rootstocks for edible pistachios and resistant to adverse environmental conditions, so that it grows in different climates in terms of land slope, soil type, different soil fertility levels, altitude (600 to 3000 meters) and temperature range of -25 to 40 °C.  Fruit and gum have different uses in food, industry and medicine. Medicinal and oral uses of Bene fruit and gum have long been reported not only in Iran, but also among the natives of all coriander-rich regions, including parts of Algeria, Turkey and Iraq. Bene fruit can be harvested at three stages; First, the unripe stage (in the form of small hollow spheres without a kernel), its skin is brittle and its color is pale green. The second stage, the kernel is completely hardened, but the shell has an ocher red color that tastes sour. The last, the ripe stage, the kernel is completely hardened and the color of the skin is blue-green.
Materials and Methods: This study was conducted to evaluate the diversity and determine some quantitative and qualitative characteristics of different Bene) P. atlantica (genotypes at the green fruit stage. For this purpose, 11 genotypes were randomly selected in an area near the city of Mirabad, West Azerbaijan Province, Iran. The fruits were harvested from each genotype and transferred to the laboratory. In this study, some quantitative traits of fruit and cluster as well as total phenol, total flavonoids and total antioxidant capacity were analyzed. Digital calipers were used to measure the length and width of fruit and clusters (mm). Also, a digital scale with an accuracy of 0.001 g was used to measure the weight of fruit and cluster. Fruit size index was calculated by multiplying the measured width by the measured length and expressed as mm2. Total antioxidant capacity was assessed using the DPPH (1, 1-diphenyl-2-picrylhydrazyl) method. Folin–Ciocalteu method was used to measure the total phenol content.
Results and Discussion: The results showed that cluster weight had the highest diversity and fruit width had the least diversity among the studied traits. Traits such as cluster width, cluster length, total phenol and flavonoid content were also highly varied among genotypes. In this study, the maximum weight, length and width of fruit were 1.28 g, 8.32 and 8.62 mm, respectively. Also, the results of this study showed that there is a significant difference between genotypes in terms of all parameters measured except cluster length at the 1% and 5% of probability level. Overall, the results of this study showed high variability in the majority of traits. The highest length, width and weight of the cluster as well as the width and weight of the fruit were seen in P10 genotype and the lowest was observed in P5 and P6 genotypes. In terms of biochemical characteristics, P3 genotype had the highest total phenol (1034.5 mg gallic acid per gram of FW), total flavonoid (143.82 mg quercetin per gram FW) and antioxidant capacity (93%) and also, the lowest total phenol (370.08 mg gallic acid per gram of FW), total flavonoids (62.25 mg catechin per gram FW) was observed in P7 genotype. According to results of this study, P3 and P10 genotypes can be used for medicinal, food, industrial purposes as well as breeding purposes compared to the other genotypes.
Conclusion: In this study, it was shown that there is a high diversity in the majority of measured traits among different genotypes. The highest morphological traits were observed in P10 genotype. Also, in terms of biochemical characteristics, genotype P3 had the highest total phenol, total flavonoid content and total antioxidant capacity. According to the results, it can be concluded that the morphological characteristics as well as phenolic, flavonoid compounds and antioxidant capacity depend on various factors, including genetic factors and environmental and ecological conditions. Therefore, the observed diversity can be related to genetic structure of genotypes, which can also be considered as a kind of adaptation and physiological response of trees to environmental conditions. 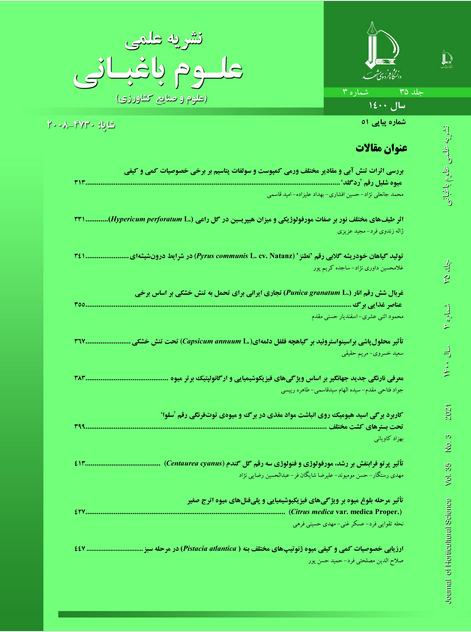